THE ROD & WHEELERS CLUB MEMBERS ARE ALWAYS WILLING TO GIVE THE YOUNGER GENERATION TECHNICAL ADVICE AND ENCOURAGEMENT.
This project is what the older generation hot rodder hopes for. The younger generation getting involved in our hobby. The following shows the progress being made on a 1954 Chevy that is being fabricated into a 50's/60's style custom by a young guy named Alex. Alex is a buddy of Rod and Wheelers club member Dave Foley. This is a very cool project that everyone will enjoy following. Keep checking in to see how Alex is progressing.
​Dave Foley's young friend Alex is staying busy....Looks like the next to the last photo is what he's settled on...he does nice work ( in his driveway & garage). It will look great when finished and painted. Dave has a lot of respect for Alex and his ability.
​ 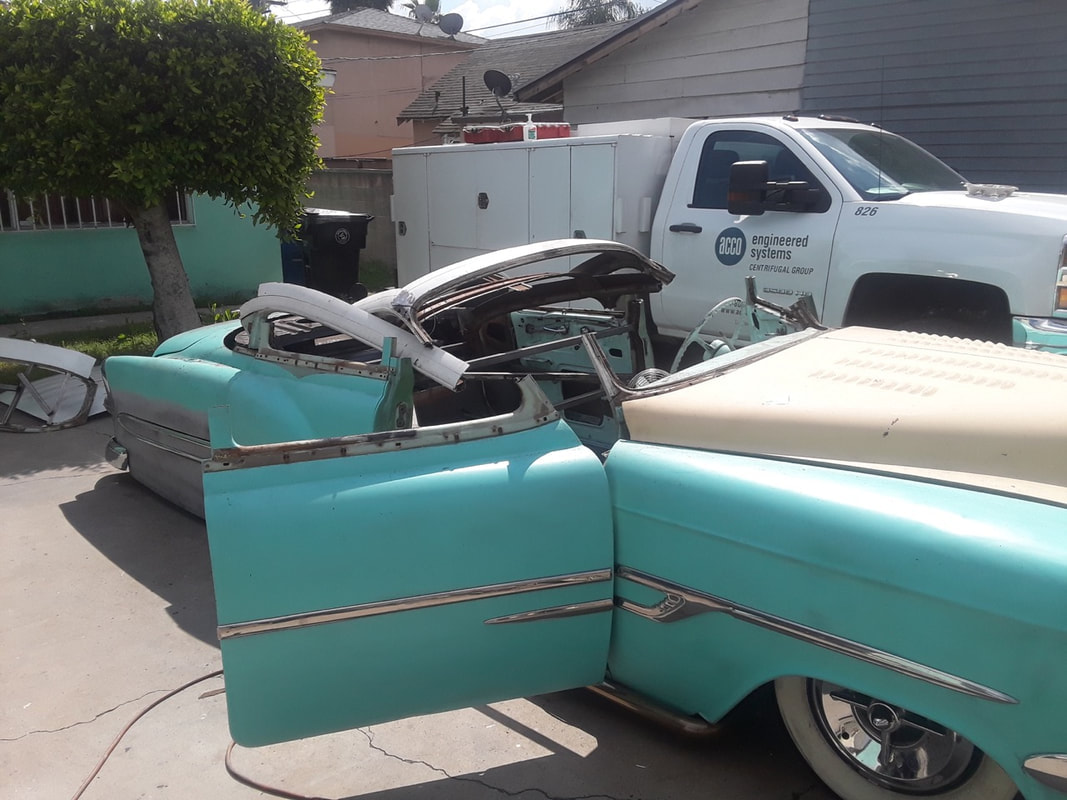 What follows is some background as told by Alex and Dave: (there is more cool stuff further down)

wow!! this is so neat!!! thank you for sharing this with me Dave, it makes me so happy to see people from your generation admire what I'm doing with my builds. Im just trying to fill your guys shoes (along with all the people from my generation tinkering with hot rods and customs.,  we know we never will, I mean you guys lived through this point in time, we just see pictures and listen to your stories and wish we were there, we try our hardest to recreate the past. I'm gonna do a little write up about my 54 so you can share with Ken and the other Rod and Wheelers. I'll send it to you either today or tomorrow. This weekends task will also include finishing up on modifying the exterior stainless on the 54 and replacing the roof skin ( I have a Buick skin that is very similar but have a little different crown so I think I'll give it a little different flow... I'm crazy I know.. its something no one will ever notice.. I'lI message you soon. gotta clean up my work station now and go home,

​
Hi Dave,  well I did it, I started the chop. This is a practice run. I found really bad cancer on both a pillars. Someone put a spot light in at one point, then when they removed them they filled the holes with silicone, water was getting in and collecting in the a pillar. I have another donor roof, going to replace the entire roof. I like the chop, but  think I'm gonna go 2inches instead of 3. What do you think? 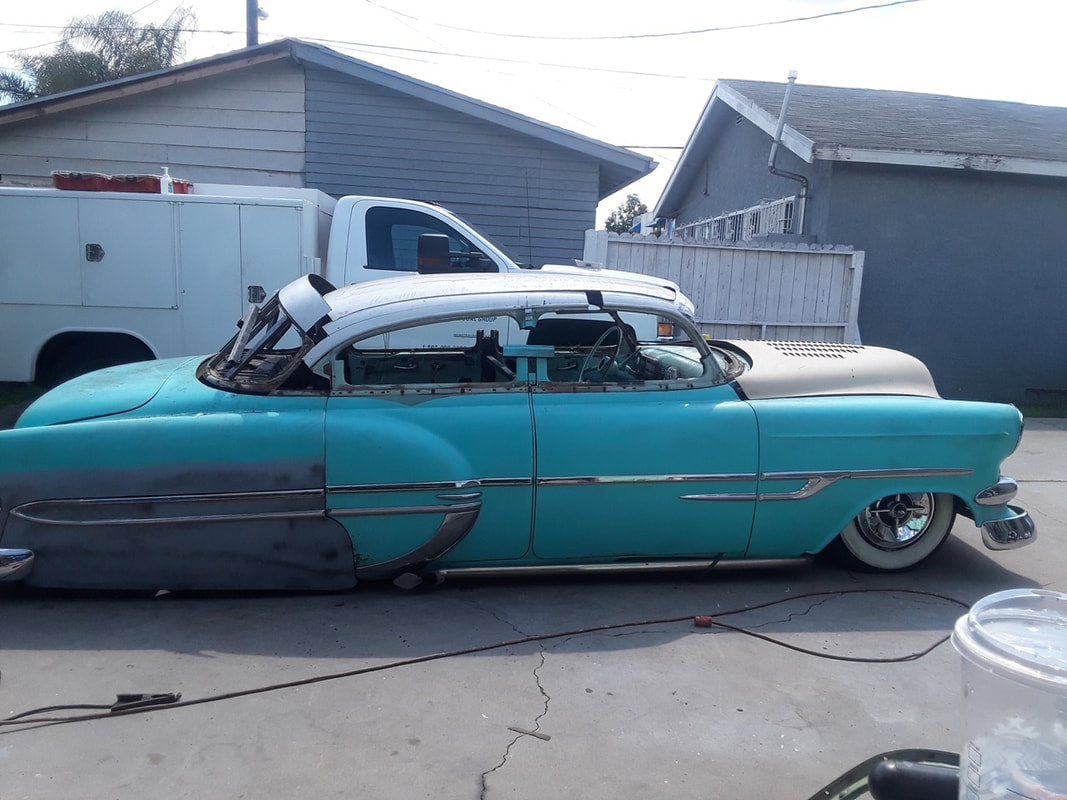 Alex is making amazing headway.....even if you don't care for this style of car ( I do) ...you have to give a thumbs up for how and where he's getting this done....just as it was in the 50's and 60's for us old farts.....and I've seen some of his other finished projects...he does nice work.
​
Hi Dave. Here are the progress pictures,  I finally got all 4 door tops cut down and installed,  along with door garnish moldings.  A friend of mine does custom glass work.  He can cut curved glass by hand, he came over and gave me the green light to proceed. He actually said the chop and metal work is really good!! He should have no problems putting glass in it. That meant a lot. He does work for a lot of "professional custom " shops all over the country, and said my work is as good if not better than some of the cars he has worked on from those shops. I'm just a guy working in his driveway lol. I have a side by side comparisons to show you the flow of the car before and after the chop. Now I gotta start the metal finishing on the pillars,  finish the roof and start extending the catwalk. That's the plan for this weekend ​ 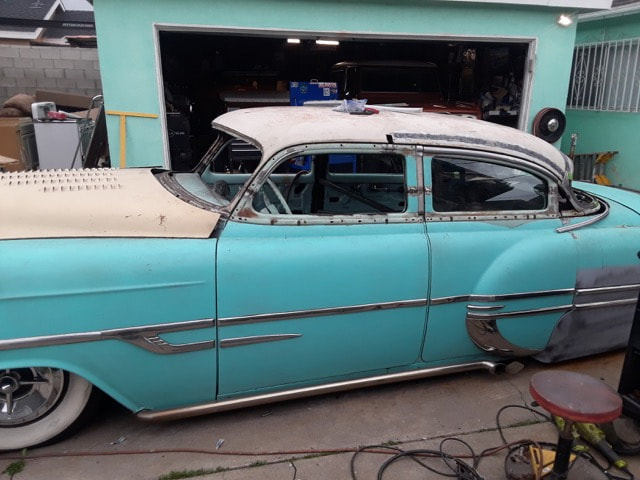 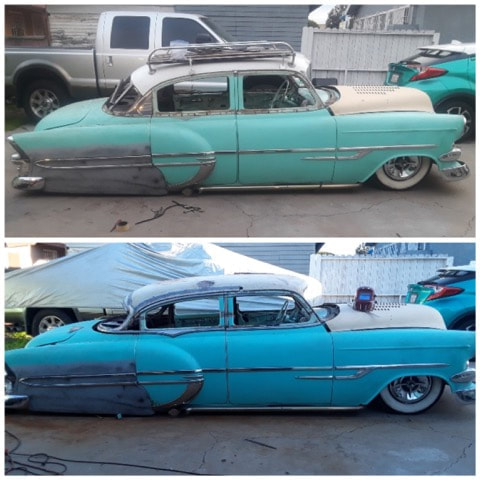 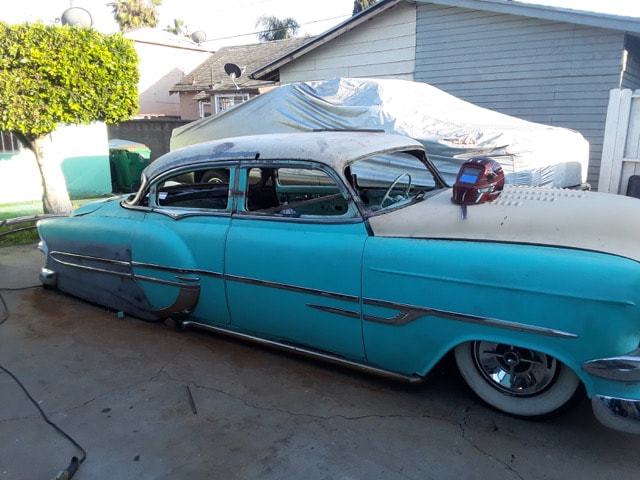 ​To get to know Alex a little better check out the following! I'm sure some of you guys can relate to this.
​
I am honored by the kind words and positive feedback I've received on my 1954 Chevy kustom. More so by the fact you thought it was built some time in the 50s or 60s.. the reality is , the customizing began when I bought it  in 2000. At that time I was 17 years old,  a senior in high school and working after school in a local repair shop in Arizona. I grew up in a border town with Mexico.  Everyone my age used to go to Mexico to party on weekends,  but I never wanted any part of that. I was always in the garage tuning my 29 roadster pickup and street racing on the weekends.  As much as I loved my roadster, it was more of a jalopy than a hot rod and I needed a better car. I wanted to build a gasser. So I began to look for a 1955 bel air.  My dad knew of a complete and solid Chevy in an old barn at a friend of a friends house. We went to check it out.. not only was it the wrong year (1954) it had to many doors.. but the price was cheap enough to resell it for a profit so I bought it. 1st thing I did was cut the front coils and put lowering blocks in it. Next I spray painted the wheels red and shaved the door handles before painting the car flat black. Threw some Mexican blankets over the seats and it looked pretty good. I put a for sale sign on her and started driving it around.. it was much nicer to drive than my 1929 roadster.  One night I went to a party with a friend, my friend wanted a ride to the liquor store to get more beer and I offered to take him. Several of the girls in the party asked if they could go with us because they have never gotten a ride in an old 50s car,  that's when I realized, girls don't care if it's a 2 door, 4 door, 10 door haha. So I decided to keep it. I named the 54 Rosie, after my aunt whom was also born in 1954. Over the last 2 decades I've been improving her as my skills improved.  I've always loved traditional styling and thought, if a 17 year old kid in the late 50s acquired their parents old 4 door sedan, how would he make it cool,so I slowly customized it a accordingly.  It slowly became a radical kustom. Currently it has a 1956 bel air bumper, I shaved the bumper bolts, added an extra 16 teeth to the factory grille, 1956 olds headlights, a 1949 Chevy hood, with louvers and will eventually get peaked, 1953 Pontiac side trim flipped upside down and blended with the original 54 belair side trim, 1955 belair wheels well flairs grafted 3 inches lower to make the car look that much lower, the rear skirts have been molded in and extend to make flush mounted cruiser skirts, 1955 belair rear bumper also shaved the bumper bolts, 1955 Buick taillights, I just chopped the top 2.5 inches.  I plan to swap the dashboard with a1955 Chevy and give it a Watson style paint job.

Guys,
Chopped progress report from Alex ....he's a doer for sure.
Keep in mind...he's still working full time.
Dave
​
Hi Dave,  hope all is well with you and your family,  here is my weekly progress report haha. I patched the roof and reinstalled the missing rain gutter section from the top. I also finished off the c pillars and extended the catwalk. What do you think? 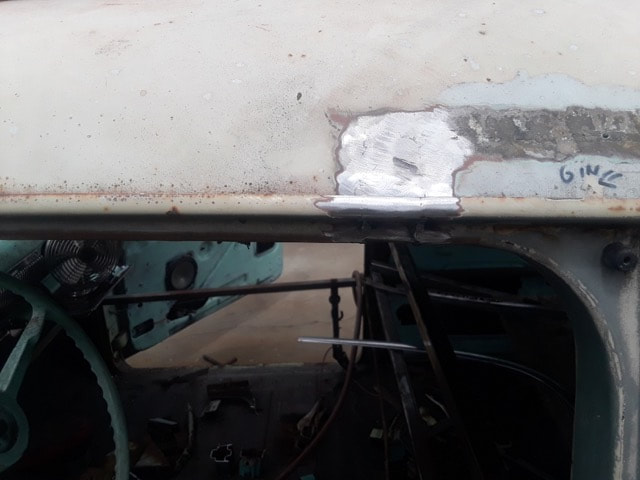 ​Hello Dave,  happy Monday.
It was a hot weekend,  but I managed to get some work done. My very good friend Dave came over and helped me start cutting the stainless. He is a professional welder, he works for the city. We just tacked everything and hes going to tig it all back for me. I also managed to rework the vent windows. I had to make a metal template.  Uses a torch and bent them to the new shape, I should be able to just polish them back since they are stainless.  It was so stressful and tedious Haha. I took a quick picture of my garage in the middle of the job. Haha we had a mess. My work benches are full of things. As you can see it's just a normal garage. I don't have fancy tools or anything expensive. But I do my best with what I have.  ​ 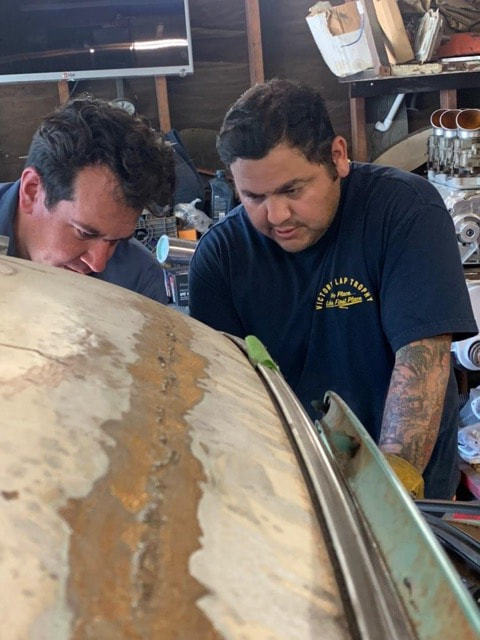 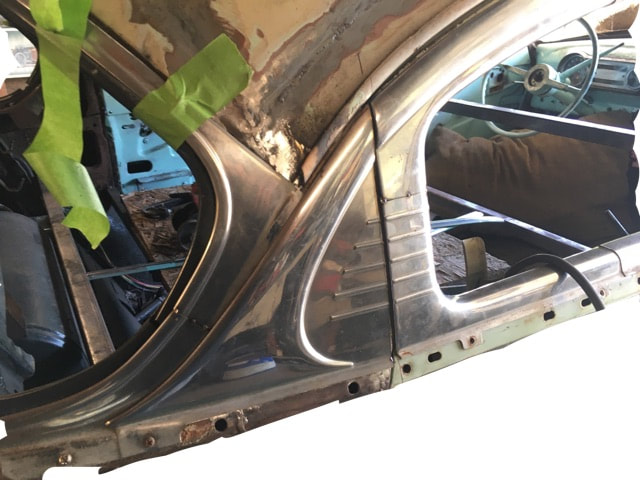 ​
​I didn't get as far as I had hoped Dave,  but the new roof skin is tacked in and the stainless has been chopped and tacked. Just gotta clean it up before finishing it. The last picture is me goofing off with my buddy Dave.  He’s such a talented welder. He has a union job and works for the city. I was goofing off pretending to stand over him with my arms crossed because I'm technically his boss and I don't allow union breaks and he’s working in terrible work conditions Haha. But as you can see. The stainless work is coming out beautifully.  It actually looks stock.. just chopped 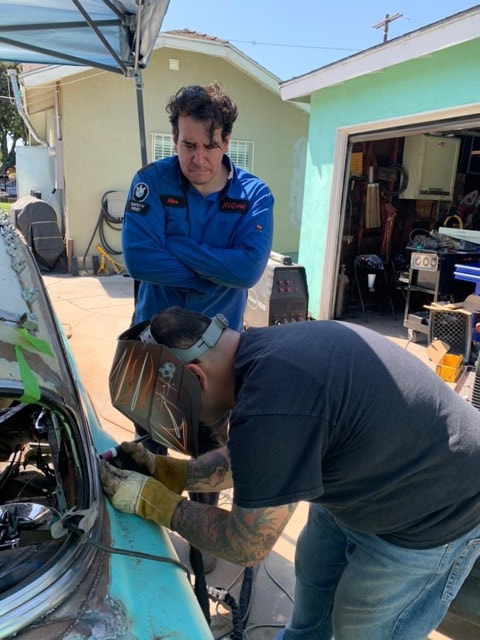 Hi Dave,  hope all is well, I haven't been getting as much as I'd like done.. but progress is progress. I finished the roof skin transplant and pancaked it very subtle. Looks great. Didn't lose the iconic roundness 50s cars had. I also roughly finished chopping all the inside window mouldings. The welds are gonna get cleaned up and eventually chromed.  Here are a few pictures 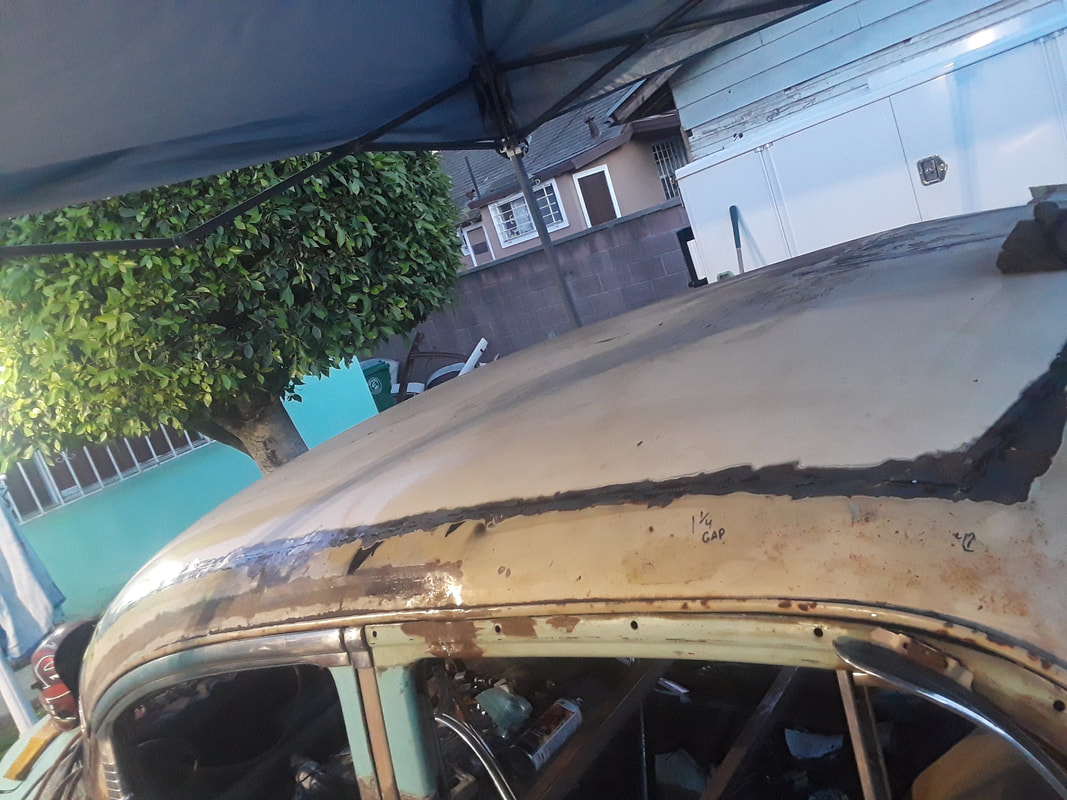 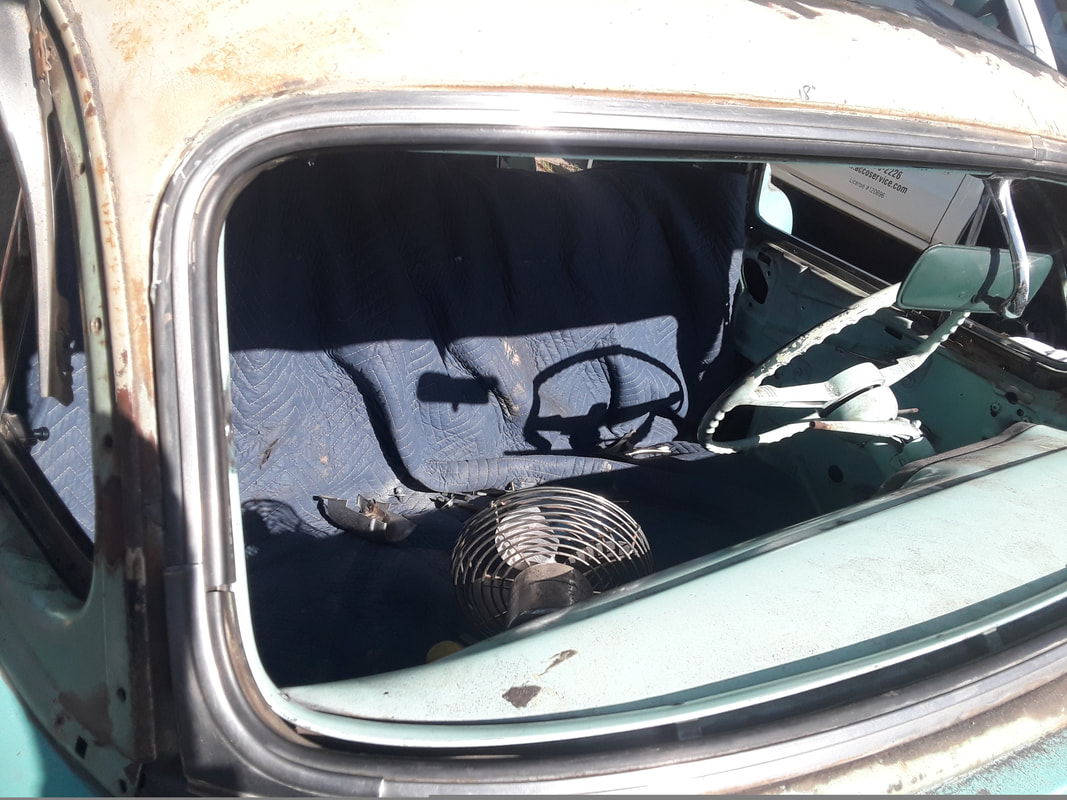 Here it is Dave --- I cut out the 54 Chevy dash and swapped in a shorted 55 Chevy dash.. what do you think.  I'm trying to make it work with the factory 1954 column, I like the external shift linkage vs the enclosed one on the 55 Chevy. I am planning on using a 1954 Corvette horn ring. I enclosed a picture of it mocked in. I've been saving that horn ring for about 12 years. My vision is slowly becoming a reality ​ 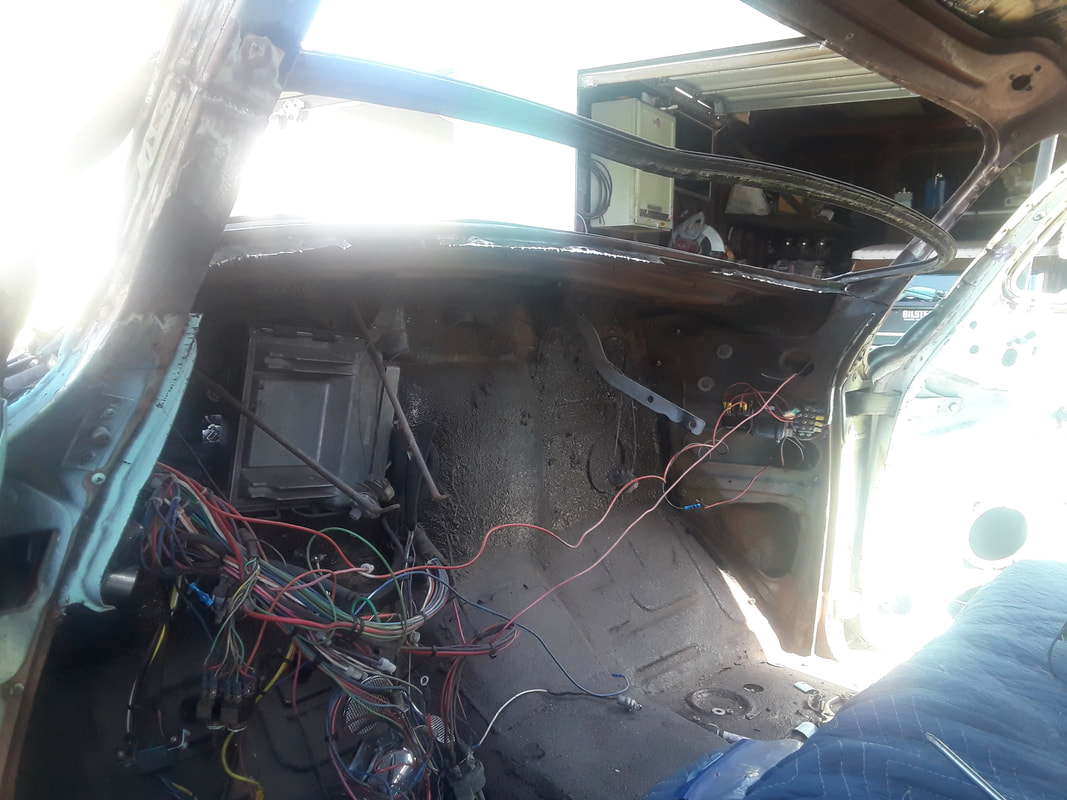 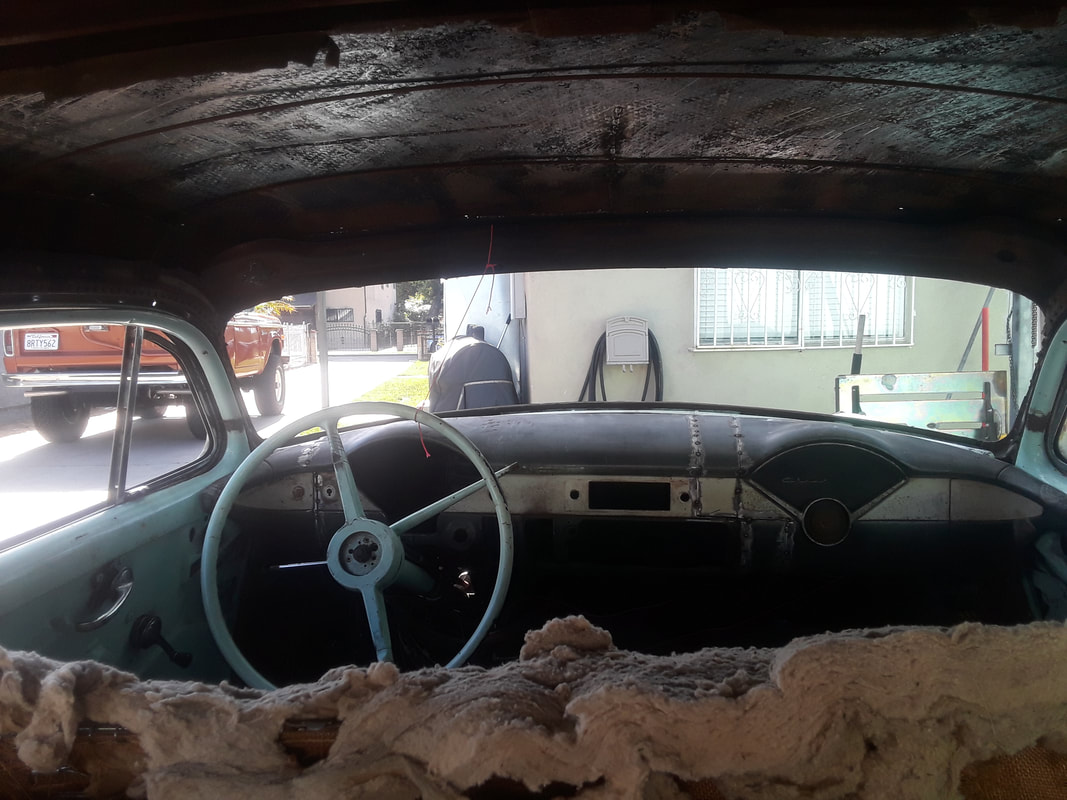 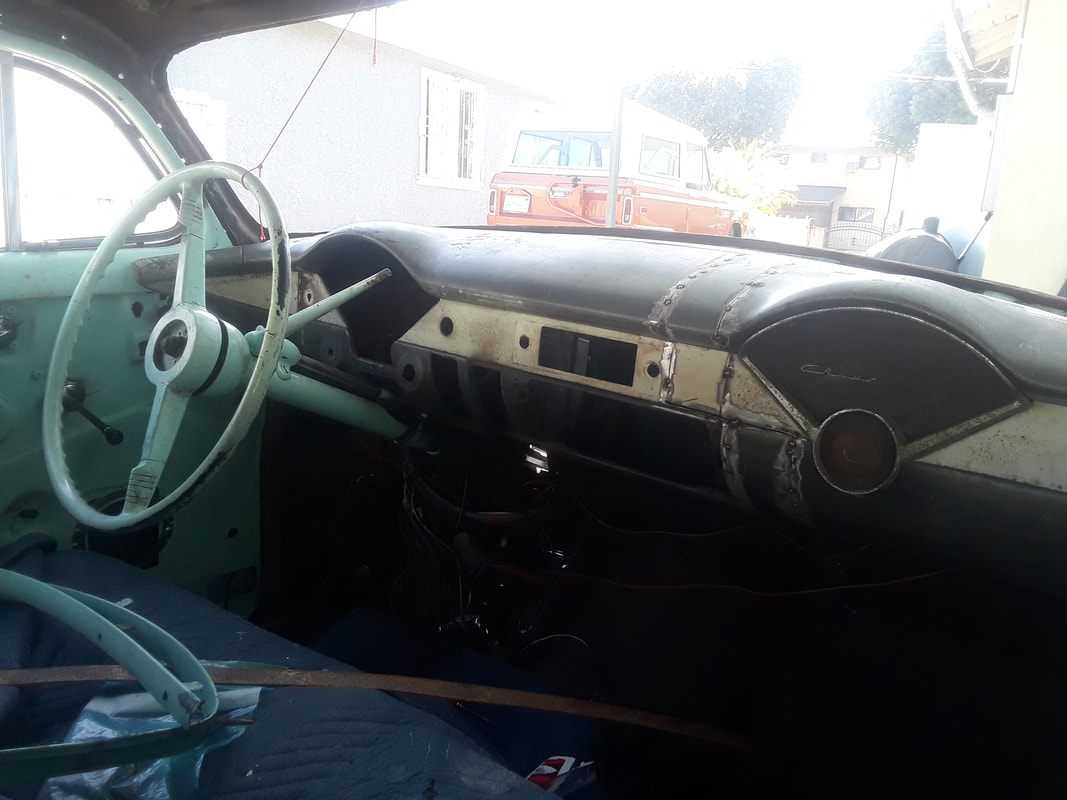 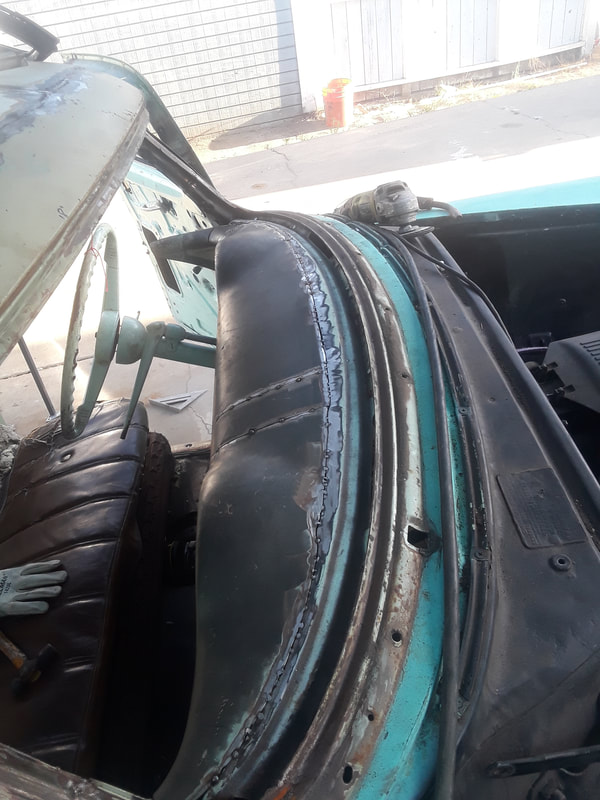 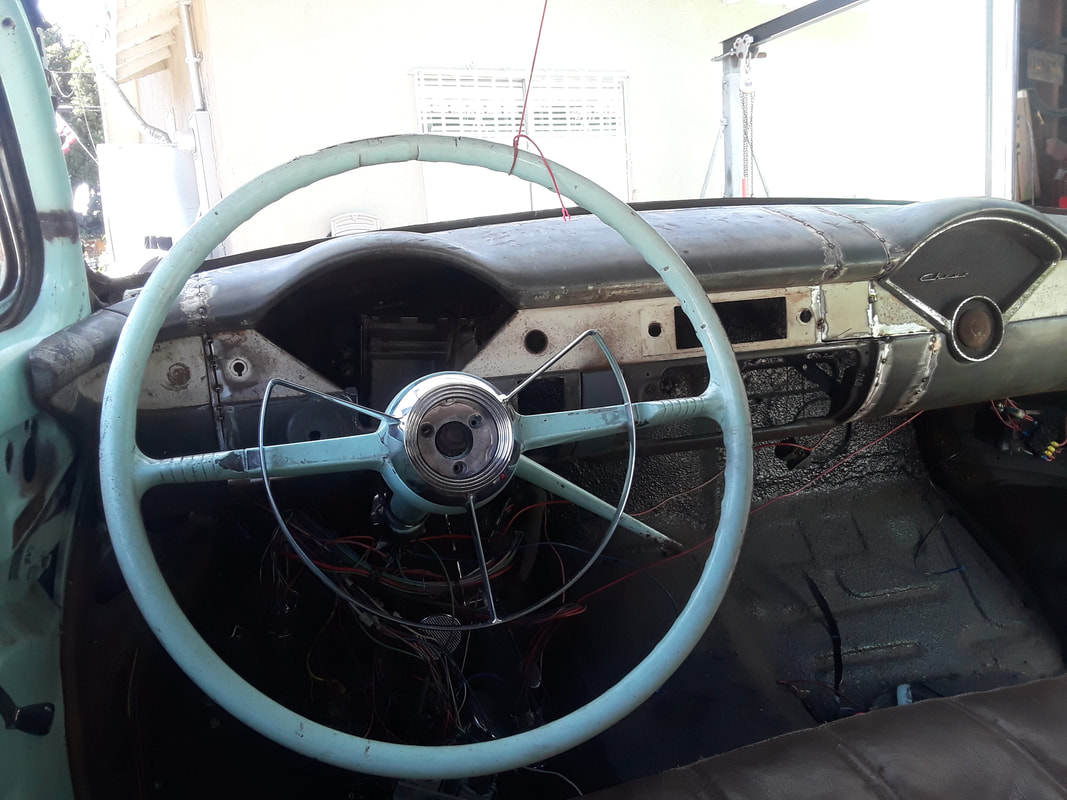